Giant Hogweed (Heracleum mantagazzium) is a non-native, invasive species that was thought to have been introduced to the UK in the 1800s. It can cause serious harm to humans. 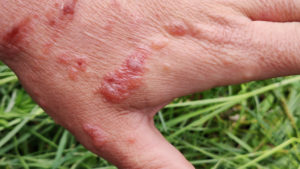 As stated in the ‘Wildlife and Countryside Act 1981’ section 9.14, it is a legal offence to cause giant Hogweed to grow in the wild in England and Wales, and similar laws apply to Scotland and Northern Ireland. It also falls under ‘Anti-Social Behaviour Orders’ where those who have giant Hogweed infested land can be required to remove the weed or face penalties.

Has a similar appearance to cow parsley. The plant can grow up to 3m tall and has thick, purple blotched stems. It has white, upward-facing umbel flowers that can measure 60cm in diameter and is biennial. The Giant Hogweed forms a rosette of lobed leaves with jagged edges in the first year before sending up a flower spike in its second year and setting its seed. Occasionally, Giant hogweeds are perennial and come up each year.

Giant Hogweeds depend entirely on seed dispersal to spread. Between August and October, seeds are released from a single plant after fertilisation (from two separate plants). However, an overlap between the male and female phases of the plant makes self-fertilisation possible. The seeds germinate in cold and wet weather conditions, or lay dormant in the upper layers of soil for 7+ years. A majority of seeds fall close to the plant, which therefore causes areas to become densely populated. Additional factors such as flowing water, being stuck in vehicle tyres or the wind can create a further spread.

Due to the chemical ‘furocoumarin’ that is found in the weed’s sap and can cause photodermatitis or photosensitivity (severe skin burns where the skin becomes sensitive to sunlight), Giant Hogweed has to be explicitly treated and disposed of carefully. Landowners are not obligated to eliminate giant Hogweed; however, local authorities will often take action in public areas. As mentioned above in the ‘Laws Associated’ section, causing giant Hogweed to grow in the wild is a legal offence.

Giant Hogweed can be removed using both chemical and non-chemical methods. It is important that when controlling the weed to always wear gloves, cover any exposed skin and ideally wear a face mask. In the case that you come in contact with the plant, you should immediately wash any skin that was touched thoroughly with cold water, avoid sunlight for a few days afterwards and seek medical advice.

Pull plant up by hand when soil is moist. The best time of year to do this is in May before the Giant Hogweed as produced its flowering ‘spike’. Never let the plant set seed, but let the plant flower and remove it before the flowers fade. This makes the weed less likely to survive, but will not reduce dense populations of it quickly. Avoid sunny spells and make sure you’re skin is protected from the sap. For larger areas, it is advised to seek professional help.

Choose an appropriate weed killer – systemic weedkillers tend to be the best choice as these kill both roots and top-growth. Giant Hogweeds thrive near a waterway, but it is imperative to remember that weedkiller must never enter waterways, and you should contact the Environment Agency before using weedkiller near any rivers, streams or ponds. Glyphosate and Triclopyr weedkillers are most effective.

Giant Hogweed (like Japanese Knotweed), is a controlled waste meaning it must be disposed of in a licensed landfill site that requires documentation. Conversely, plant material can be disposed of through composting or burning, but the necessary precautions must still be actioned (protect your skin, wear gloves and wear a face mask).

How To Stump Grind

Your tree surgeon should have considered underground services when pricing the job. If you...

What is Sectional Felling?

How to Prepare Your Garden for Your Tree Surgeon

Always make a nice cup of tea for your tree surgeon!